The counties are one of the three levels of government below the national level ("local authorities"). Sitting above the municipalities and parishes, counties form the highest tier of local government. Presently, there are eight county councils operating in New Ingerland. 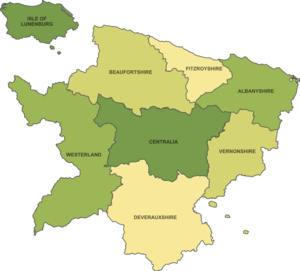 The names of the counties have a varied etymology, but all are distinctly European in origin. Of the original eight counties established in 1836, two of geographical expression of the location of the county (Centralia and Westerland), three are named for a member of the Ingerish aristocracy (Beaufortshire, Fitzroyshire, and Vernonshire), one is named for a member of the Ingerish Royal Family (Albanyshire), one for a German city (Lunenburg), and one is named after a prominent first settler (Deverauxshire).

The overwhelming number of English place names across New Ingerland generally can be attributed to the first explorers and settlers who named much of New Ingerland after places in their ancestral homeland or after patrons who had financed the expansion of the archipelago .

Six of the modern counties were formed by way of an Order-in-Council on the 7 November 1836 and formally came into existence seven days later. The metes and bounds of the counties was not fully defined at the time of their proclamation, with the Surveyor-General expected to fully define their boundaries in due time. The first Surveyor-General, James Lang, had originally envisaged 10 counties, but the lower population of the country south of the Main Range led to the reorganisation of the counties in February 1854. The administration of the New Ingerish counties was based on their English namesakes, and held many of the same functions and powers of these bodies. The original purpose of the counties was to serve as the basic unit for the administration of the country. For example, land titles were (and still are) registered along county lines, as is New Ingerland's intermediate court (the Crown Court). The Church also used the counties as a natural subdivision, originally as archdeaconries and later as fully-erected dioceses.

For the first fifty years of their existence, the counties were governed by unelected Courts of General and Quarter Sessions. The courts were led by judges appointed by the Crown and supported by local property owners selected to grand juries. These courts of sessions met "in the counties to hear cases, make regulations, authorise assessments, and appoint local officers". In practice, this meant that as well as dispensing justice for minor indictable offences, the quarter sessions were responsible for the administration of matters such as the repair of roads and bridges, poor relief, policing, the licensing of public houses, and the setting land rates. Like their English counterparts, the quarter sessions were so named because of the four days of the year on which they met. These days were Epiphany (6 January), Lady Day (25 March), Midwinter (21 June), and Michaelmas (29 September) sessions.

By the 1880s, the ancient system of local government administration was considered insufficient to meet the demands of the population. Therefore, in 1885, the Clifton government enacted the Local Government Act[1]. The act established elected county councils, who took over all of the non-judicial functions of the quarter sessions.

At the same time, Centralia was divided in to three ridings, each with their own county council, quarter sessions, and land records.

The counties of New Ingerland maintain a wide range of powers and responsibilities, making them a key interface between the general public and government services. Counties are responsible for most matters that require a solution on a regional level, and may make by-laws for certain matters delegated to them by one of the various Local Authorities Acts. All county by-laws are usually enforced by law officers known as county rangers. There are a number of exceptions to the rule, which allow the Parliament to legislate an exclusion of county authority for certain projects or places. For example, trunk roads are under the control of the Roads Agency, and the counties do not have to maintain or construct any road managed by that authority.

Since the passage of the most recent Local Government Act[2], the function and powers of the counties were reorganised to include the following roles:

The following is a list of the counties of New Ingerland, with postal code, county town, and population.

In addition, the following counties have been abolished:

Retrieved from "https://guelphia.mywikis.wiki/w/index.php?title=Counties_of_New_Ingerland&oldid=8698"
Categories:
Cookies help us deliver our services. By using our services, you agree to our use of cookies.