Culture in New Ingerland is a typical of a modern European style western nation. New Ingerland is a firmly traditionalist and conservative nation whose beliefs and tastes reject the modernism and post-modernism of the twentieth and early twenty-first centuries.

New Ingerlanders have a strong emphasis on western style culture, although some polynesian influences can be seen, particularly in the culture of the Ngati Mōri. New Ingerland's cultural protection laws have allowed a large local entertainment industry to survive and export its talent overseas. Imported cultural trends also thrive and are enjoyed by almost all adults to a lesser or greater extent.

New Ingerland's arts community is a very diverse sector, with a number of artists, musicians, composers, sculptors, dancers and actors all having achieved international recognition. The arts scene in New Ingerland is divided into high, popular and independent cultural scenes, which between them attract almost all New Ingerlanders in some way or another.

The heart of the arts community can be found in the national capital, Kingsbury, but the coastal centres of Port Frederick and Corfe Harbour have also attracted an ever growing arts scene. 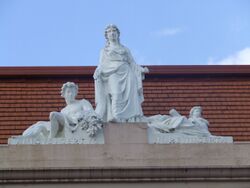 The cultural heritage of New Ingerland revolves around the preservation of both man-made and natural items of national significance. Items of significance include historical buildings, monuments, furnishings, equipment, as well as native plants and animals. Many of these items have been placed on to the Register of Cultural Heritage, which is in effect a database of heritage listed items.

A significant part of New Ingerland's cultural heritage is managed through a system of protected areas. These areas are responsible for both cultural heritage and environmental protection, and have a large amount of crossover between the two. The responsibility to such areas is split between a number of government and private organisations.

Unlike some western nations, journalism in New Ingerland is still held in high regard. There is one national newspaper, The New Ingerlander which is a daily broadsheet. In addition, most of the major cities and towns have a daily paper of their own. Red-top tabloids of the British sort do not exist and nor do the celebrity gossip magazines so commonly seen in other countries.

New Ingerland also has a significant broadcasting industry, with the principal producer being Radio Television New Ingerland, a state owned and funded organisation that carries a number of services to different parts of the community. The private sector is also strong, with most of the major centres having access to at least two commercial television and radio networks. 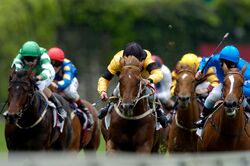 Throughbred racing is a popular sport for many people

New Ingerlanders are a very sporting people, and are encouraged to play and participate in some form of sport. The government has actively encouraged amateur sport through generous funding of local sports facilities. There are five major team sports played in New Ingerland, all of which are played (to varying degrees) by members of both the sexes. In 2013, the most popular sports are Australian football, netball, cricket, rugby football, and hockey.

Unlike most western counties, the various professional sporting codes are not at all subsidised by the national government, and professional athletes receiving training through the tertiary education system are charged a tuition fee for their education and training, which they can pay back as a form of tax once they earn enough money playing.

Retrieved from "http://guelphia.mywikis.wiki/w/index.php?title=Culture_of_New_Ingerland&oldid=6890"
Category:
Cookies help us deliver our services. By using our services, you agree to our use of cookies.