The judicial system of New Ingerland is an essential component of the government and maintenance of order across the Kingdom of New Ingerland. Like most nations that are descended from the Ingerish Empire, New Ingerland's legal system is based on common law, rather than the continental system of civil law. A principal belief of the New Ingerland judicature is the independence of the judiciary to make decisions independent and free of interference from the Executive Council or Parliament.

As a common law jurisdiction, the use of precedent forms the essential basis of the New Ingerland legal system. Whilst domestic precedent from 1836 onwards is used in the bulk of judicial decisions, under the provisions of various Acts, legal precedents from Ingerland and Wales up to 1 October 1907 can be cited and used to carry out judicial procedures. Precedents outside these jurisdictions and dates can still be cited in a legal argument, however their application remains at the discretion of the judicial officer presiding. Law and order is maintained by six county police forces, and a national police force in the form of the Royal New Ingerland Police.

The New Ingerland Criminal Code is the primary instrument for the source of criminal law in New Ingerland. Since the passage of the Criminal Code, there have been no common law offences in New Ingerland, and no one can be punished except for the breach of some enactment. The code is similar to the Queensland Criminal Code, which was written by the Australian jurist Sir Samuel Griffith in 1899. The constitution establishes criminal law as under the sole jurisdiction of the parliament and so county by-laws cannot legislate against criminal acts unless given the authority to do so by the parliament. Since 1947, the Criminal Code has included the offences of crimes against humanity, war crimes, and genocide. 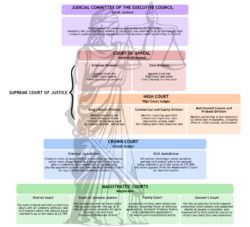 The courts system is hierarchical in structure. Cases begin at the lowest levels of the system, and are steadily escalated to higher courts either by the seriousness of the nature, or through the workings of the appeals process. Outside the hierarchy sit a number of statutory courts and tribunals that hear specialist cases which require a unique or more complicated interpretation of the law to reach a verdict.

Judicial Committee of the Executive Council

The Judicial Committee of the Executive Council is the newest and highest court in the New Ingerland court hierarchy. Established in 1977, the Committee replaced appeals to the Privy Council in London, which had served as the court of final appeal since 1836. The Committee consists of the Chief Justice of New Ingerland, and 4 Lords Justices appointed by the sovereign on the advice of the Judicial Appointments Commission.

The Committee has a twofold jurisdiction. First, it is charged with the sole responsibility for hearing appeals for clemency and pardon that have been made to the King-in-Council, who then refers the case to the Judicial Committee for advice on a particular appeal that has been made. The second function of the Committee is its constitutional interpretation jurisdiction, where the Committee is empowered to determine the constitutionality of any decision made in cases brought before the courts, as well as the constitutional validity of all forms of primary and secondary legislation. Such cases occur when the Court of Appeal or the Attorney General certifies that a point of law of exceptional public importance needs to be resolved.

The High Court's jurisdiction is unlimited, and consists of criminal, civil, family, and equity divisions. This jurisdiction gives the High Court the power to hear criminal matters involving offences which carry the death penalty and generally those punishable with imprisonment for a term exceeding ten years, while in civil matters, the court will hear cases dealing with in excess of £37,500. It also the court of first instance for matters relating to the Companies Act, the Matrimonial Causes Act, the Commerce and Trade Act and the Fair Trading Act.

With original jurisdiction for more serious cases, the Crown Court deals with both civil and criminal cases, and also has some appellate jurisdiction for cases previously heard in the Magistrates' Court. There are ten regular Crown Courts sitting across New Ingerland, with a court usually sitting in the county towns and other major urban centres as required. Judges of the court travel around a circuit, with each circuit being the same as the eight counties[1].

All criminal proceedings on indictment must be brought before the court, such as serious theft, fraud, and assault. All matters in involving motor accidents are heard by the court, regardless of the amount involved. In civil cases, the Crown Court handles matters where the amount being claimed is up to £37,500.

At the lowest level of the court system sits the Magistrates' Court. Established by the Magistracy Act in 1971, the court hears the overwhelming majority of cases and, as the name suggests, they are presided over by a magistrate. Magistrate Courts are the most common type of court found in New Ingerland, and are located in most significant urban centres.

The court deals with minor summary offences such as petty theft and traffic offences. In civil matters it deals with cases where the amount in dispute is less than £3,750, although matters of less than £50 may be heard by the Petty Claims Tribunal. Also within the framework of the Magistracy Act are specialist courts, which are required to preside over matters more exceptional in nature. These courts include the Court of Juvenile Justice and the Court of the Coroner.

The Ingerian Church of New Ingerland maintains a series of courts, under the authority of the Crown, over matters dealing with the rights and obligations of church members. These matters include church property and ecclesiastical disciplinary proceedings. Doctrinal matters are also heard by a special court, the , convened in cases involving church doctrine, ceremony, or ritual.

The role of judicial officers is a major part of ensuring the business of the court system operates smoothly. New Ingerland's judicial officers are divided into two classes consisting of judges and magistrates. To be eligible to sit as either, one must be of sound mind and good character, with judges also needing to be practicing legal professionals to be eligible for appointment.

The legal system of New Ingerland has a single college of judges who sit on the bench of one of the two intermediate and higher courts of New Ingerland, they being the Crown Court, the Surpreme Court of Justice, and the Judicial Committee of the Executive Council (where they are known as Lord Justices). Judges are promoted on the basis of merit and experience, with appointments made by the Judicial Appointments Commission. Judges have broad ranging powers and are required to be impartial and not influenced in any way by outside factors. When there is a jury trial in the trial courts, the jury generally decides questions of fact, while a judge decides questions of law and will craft jury instructions. Crown and Supreme Court judges are always addressed as "Your Honour". Justices of the Judicial Committee of the Executive Council, who are almost always made peers upon their appointment to the Committee, are addressed as "My Lord".

In New Ingerland, magistrates preside over the Magistrates' Court, as well as some of the statutory courts and tribunals. They hear prosecutions for and dispose of summary offences, by making orders in regard to and placing additional requirements on offenders. Magistrates' sentencing powers are limited, but extend to shorter periods of custody, fines, probation and community service orders, and a miscellany of other options. Magistrates hear committal proceedings for indictable offences, and establish whether sufficient evidence exists to pass the case to a higher court for trial and sentencing. Magistrates have power to pass summary offenders to higher courts for sentencing when, in the opinion of the magistrate, a penalty greater than can be given in magistrates court is warranted. A magistrate is always addressed as "Your Worship".

The legal profession in New Ingerland is divided between solicitors and barristers. Both are trained in law at university but serve different functions in the practice of law. In order to become a barrister or solicitor, a person must have had a qualifying legal education. The most common methods are a normal undergraduate law degree known as a Bachelor of Law, or LLB, which may also be doubled with another degree, such accounting, arts, or science. After this stage, the process for the two professions is somewhat different.

After the completion of their studies, a student wishing to become a solicitor undertakes a one year course called the Legal Practice Course. In New Ingerland, the course is run by the Faculty of Law of University College Kingsbury. This is then followed by a two year apprenticeship with an experienced solicitor, at which point they are known as training clerks. Once that is complete, the student becomes a solicitor and is admitted to the Roll of Solicitors. Solicitors are regulated by the Law Society of New Ingerland, which is the professional guild for solicitors.

Any person seeking to become a solicitor must be free of convictions for any indictable offence, and must prove that they are person of integrity, good character, and reputation.

A person wishing to become a barrister must complete the process of becoming a solicitor and then must practice as a solicitor for seven years before he or she can seek to be called to the bar. To process involves a number of character references and interviews, followed a twelve month course. Having completed these requirements, a person is eligible to be called to the bar and allowed to practice, either in chambers or outside court in the private sector or academia. Barristers are members of the General Council of the Bar, to which they must be admitted before they are permitted to practice law.

A King's Counsel is a barrister (and occasionally solicitor) who has been appointed by letters patent to be one of His Majesty's Counsel learned in the law. The title of King's Counsel exists in various Commonwealth countries around the world, and was inherited in New Ingerland from the English legal tradition. The title is one of status rather than another rank of lawyer, and is recognised by courts as a privilege that has been conferred on the individual by the Crown.

The appointment of King's Counsel is made from within the legal profession on the basis of merit, however successful applicants tend to be those with 15 years or more experience.

Retrieved from "https://guelphia.mywikis.wiki/w/index.php?title=Judiciary_of_New_Ingerland&oldid=9044"
Categories:
Cookies help us deliver our services. By using our services, you agree to our use of cookies.