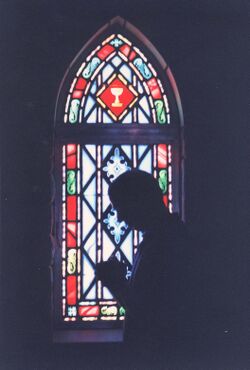 Christianity is the dominant religion in New Ingerland

Religion in New Ingerland is dominated by Christianity, and in particular Ingerianism. New Ingerland is a very religious country and religious expression has become an important feature of New Ingerland's society since settlement. From the earliest days of settlement, the leaders of the nation recognised that a stable faith system plays an important part in the happiness of the individual. New Ingerish have been encouraged to seek a system of faith that best suited their personal philosophies and follow it for life.

Whilst New Ingerland is overwhelmingly Christian, a person can hold or establish any system of faith they wish, as long as it is not likely to cause conflict with the law. Such religions can be expropriated from the protection of the constitution and persons may face prosecution.

Of New Ingerland's 3.3 million people, almost half attend ceremonies related to their faith at least once a month. Unlike most of the west, saying you belong to a faith actually means something, and goes further than attending church for a marriage and one's own funeral. Therefore, most people can be found at their religious place of worship at least once a week. Many more participate on the various committees of their group, including the group's overall governing body, religious education committee or the building and grounds committee just to name a few.

The statistics from 2010 Census for Population and Housing[1] for current religious affiliation are set out in the table below.

The Ingerian Church is by far the largest Christian denomination in New Ingerland with 743,713 members or some 78.42% of the population. The Church is the established state church of the kingdom, and is therefore afforded certain rights and privileges not enjoyed by other denominations. The Church has therefore played a major role in the development of the kingdom and is one of the bedrocks of the New Ingerland establishment, with members including the Sovereign (who is officially recognised in the Constitution[2] as having supreme authority over the Church[3]), and all but two Prime Ministers since 1907.

The Methodist Church is the second largest denomination in New Ingerland with 193,831 members or 2.2% of the population. Theologically, the church is highly decentralised, and provides training for ministers and basic support for the various congregations. The direction of the individual congregations is largely left alone, with the church issuing a basic Statement of Faith that all member groups must adhere to. Outside this, the congregations are free to direct themselves as they wish.

With 483,882 members, or 1% of the population, Catholicism ranks as the third largest Christian denomination in the land. The church is not autonomous, and holds to the tenant of papal supremacy. The present pontiff Pope Francis, has ruled since March 2013. The present leader of the Roman church is the Most Reverend Patrick Davis, who holds the sole episcopal title of Bishop of New Ingerland.

New Ingerland's Jews are chiefly descended from settlers that arrived from Eastern Europe between 1938-39 and 1945-48 fleeing persecution at the hands of Nazi Germany. Today, there are 45,262 Jewish adherents or about 3.21% of the population in New Ingerland that were recorded in the last Census. The centre of the Jewish community are the cities of Port Frederick and Corfe Harbour, with a sizeable community also located in Kingsbury.Notable Jews include Jacob Meyer, 1st Earl Meyer, Prime Minister between 1975 and 1980; and Sir Gavin Sommerfeld, the longest serving Lord Justice of Appeal.

The smallest of the world's major religions in New Ingerland, Muslims make up about 0.1% or around 45,227 people. Most adherents of Islam are immigrants from Asia that have arrived since 1980. The overwhelming majority of New Ingerland Muslims are of Sunni extraction. As of 2050, Sunnis made up 95% of all adherents of Islam. Shi'a Muslims make up a further 4.9%, with the last 0.1% being those belonging to other sects. The largest mosque in New Ingerland is the Mosque of the Lion in Hillsborough.

Retrieved from "https://guelphia.mywikis.wiki/w/index.php?title=Religion_in_New_Ingerland&oldid=8451"
Categories:
Cookies help us deliver our services. By using our services, you agree to our use of cookies.