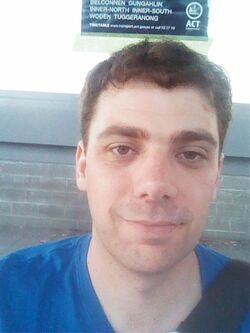 The author is a 42 year old Australian. Originally hailing from the cathedral city of Armidale, he is currently living in Canberra, Australia's national capital.

He was born in June 1980, and moved to Grafton with his family before the age of one. After finishing school in 1998, he returned to Armidale to study at the University of New England. He dropped out of university in 2001, and pursued an abortive career in politics before being employed by the university in IT support. Today, he is again studying, and is seeking a new career in life, having left the IT industry in July 2013.

His own political and cultural views have manifested themselves throughout this site, and Guelphia Online is an attempt to model a society and people with the values and norms that he believes in. Aside from geofiction, his interests include Australian rules football, railways, European culture and history, gardening, birdwatching, and popular entertainment.

He is gay, his favourite holiday location is New Zealand, and he is owner of two Maltese x Shih Tzu dogs. He can also speak a little Portuguese, but not much.

Retrieved from "https://guelphia.mywikis.wiki/w/index.php?title=User:Turnsole&oldid=1632"
Category:
Cookies help us deliver our services. By using our services, you agree to our use of cookies.