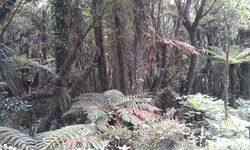 New Ingerland's forests are varied in their appearance and diversity

New Ingerland's environment is one of unique flora and fauna living in some of the most hardy and resilient habitats in the world. Like other lands at this latitude, such as the Harda Archipelago and far south of Astrasia, the Moonshine archipelago is dominated by a number of temperate and sub-tropical forests, and moisture loving species thrive here. However, the unique geographical and climatic extremes can result in sub-tropical forests being found a few miles from snow-bound mountains.

Consistent efforts have been made to preserve New Ingerland's flora and fauna species from extinction. Much of the land was overdeveloped in the nineteenth and twentieth century, but restoration efforts since the 1980s have restored a large amount of land back to a sustainable state. Conservation measures to reduce pollution, recycle waste, and cut out chemicals have led to a nation of healthier people living in a land that is better able to cope with their presence.

New Ingerland's biodiversity is similar to other parts of the Kartumian continent. These affinities are due to the modest age of the archipelago (~30 million years), and the nearby location of New Ingerland to Kartumia.

New Ingerland's biodiversity exhibits high levels of endemism, both in its flora and fauna. There are only a small number of native terrestrial mammals, with the main component of the fauna being found in the form of insects and birds. Its flora is dominated by Kartumian plants, comprising historically of forests and heath. More recently a component has been introduced by humans, in the form of both fauna and flora, which has had a significant impact on the biota of the archipelago.

The climate of New Ingerland is mostly cool temperate in the south and warm temperate to sub-tropical in the north. The country can be divided in to three climate zones:

Encompassing Lunen Island and all of the river valleys north of the Central Plateau of Brunswich Island, the coastal zone is the largest of New Ingerland's three climate zones. The zone tends toward a sub-tropical climate, although some areas close to the escarpment are more temperate in nature. On the whole, the climate is characterised with warm summers and mild winters. Rainfall is spread throughout the year, and is the wettest area in New Ingerland.

Occupying much of central Brunswich Island, the Central Plateau forms the second largest climate zone. All of the region sits at an altitude of 1,000 feet (300 m) or more. The climate of the zone is the most even in New Ingerland, with mild to warm summers and cool to very cool winters. Rain is more common over the summer, although winter precipitation in the form of snow and sleet is not uncommon.

The smallest of the three climate zones, the south coast consists of all of Brunswich Island south of the Central Plateau, as well as the volcanic islands that form the south-east of the archipelago. The climate of this zone tends from temperate to sub-antarctic, with rainfall being evenly spread through the year. The temperature is characterised with mild summers and cool to cold winters.

New Ingerland's various protected areas are divided into seven categories, matching the Protected Area Management Categories of the International Union for Conservation of Nature. Today, each park and reserve is classified according to it's conservation needs, which in turn dictates the level of public access allowed and what facilities a protected area may have.

Today, there are 0 individual protected areas in New Ingerland, who between them occupy 0 square miles (0 square kilometres) or 0.00% of the total national landmass. The administration of New Ingerland's protected areas is the responsibility of the Royal National Parks Service and the Forestry Commission.

Retrieved from "https://guelphia.mywikis.wiki/w/index.php?title=Environment_of_New_Ingerland&oldid=8195"
Category:
Cookies help us deliver our services. By using our services, you agree to our use of cookies.