The Royal New Ingerland Navy is the chief naval force of New Ingerland, and is part of the New Ingerland Defence Force. By world standards, the Navy is is classified as a green-water navy, with a primary capability of operating within 500 nautical miles (930 kilometres; 580 miles) of home port. The navy deliberately lacks the ability for sustained long-distance combat operations, concentrating instead on the home defence of New Ingerland. 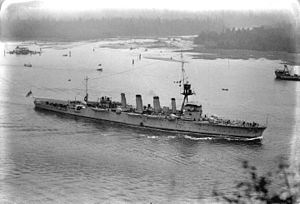 Prior to the twentieth century, naval defence of New Ingerland was conducted by the Ingerish Royal Navy. In 1906, the Imperial Conference agreed that in addition to new constitutional arrangements, the dominions would assume control over their own naval defence, with the Royal Navy to provide support and training, and in the event of conflict, serious reinforcement.

New Ingerland's first commissioned ship was the HMS Invictus, which was launched in 1915.

The Royal New Ingerland Navy is composed of regular, reserve and national service personnel. The regular navy is a full professional outfit, whereas the naval reserve is a part time reserve outfit only called upon in emergencies. While New Ingerland employed the use of conscription, conscripts could not be deployed onto active duty and acted only in a support role after their initial training period. New Ingerland used conscription, known locally as National Service, from 1955 until it was discontinued in 2015.

The Royal New Ingerland Navy operates from three principal establishments across New Ingerland, plus a handful of smaller facilities that support the operation of the fleet. The principal establishments are the two dockyards, located at Goodwood and Te Piha, with all commanded by a Commodore. All dockyards carry the designation HMND for His Majesty's Naval Dockyard. In addition, smaller fleet facilities exist at Bentley, Bonshaw, Goodwood (Seawolf and Sceptre), Te Piha (Scimitar and Scylla), and Whangaroa, and carry the designation of HMNS for His Majesty's Naval Station.

The current fleet involves eighteen ships and submarines plus supply and support vessels.

Retrieved from "https://guelphia.mywikis.wiki/w/index.php?title=Royal_New_Ingerland_Navy&oldid=8437"
Categories:
Cookies help us deliver our services. By using our services, you agree to our use of cookies.