Station Creek is a royal estate used by the Governor-General of New Ingerland located in Fitzroyshire, 12 1⁄3 miles (19.8 kilometres) west of Poundyard Bay. Consisting of two houses, the property is one of the two major estates that are under the care of the Crown Estates Trust. The estate is an official residence of the Crown, and serves as the vice-regal seat for six weeks in December and January every year.

Prehistorically, Station Creek was inhabited by the Ngati Mōri, and it is these people who gave the name to the nearby national park that would be created in the twentieth century. One of the first Europeans thought to have visited the area was Major Henry Oakes, the Commissioner of Crown Lands for Fitzroyshire in 1840.

Development of the area over the next 60 years included cattle grazing, sugar plantations, and sand mining. During this time, the ownership of the land also changed hands on several occasions, as successive interests tried to make of living off the sandy and generally unproductive land. Despite several attempts at working at profit from the estate, and the investment of thousands of pounds worth of infrastructure and labour, every venture in the area failed to generate even a small profit. All attempts at working the land had ceased by the 1900s, and the land was considered to be little better than wasteland, good for nothing more than hunting ducks or gathering firewood.

After a few years of lying idle, in late 1908 the land in and around Station Creek was purchased by Prince Philip, the second son of Arthur IV during his tenure as the first Governor-General of New Ingerland. The prince, who was an avid fisherman, hunter, and walker; considered the land ideal for his personal recreation, and given it's unsuitability for agriculture, believed it was best possible outcome for the land and the people living nearby who had hitherto been unable to make a living off it.

The purchase of the land by the Prince would prove be a boon for the local inhabitants of the nearby village, who could now find work on the estate as gamekeepers, groundsmen, gardeners, and domestic staff. The prince spent his first summer at Station Creek in 1909/10 in a small timber-framed building, known as The Cottage. The building was constructed over the a few months in the winter of that year, and was built in the Dominion Filigree style. The Cottage was always seen as a somewhat temporary structure, being small and not particularly conducive to entertaining. There room for only three members of the Household staff, and although the family took on responsibility for it's own cooking and cleaning, thereby reducing the need for attendants. It was however, comfortable enough and the Prince reported that he and the family had enjoyed their time away from Kingsbury in such a beautiful and remote spot.

The Prince and his family returned the following summer and used the same cabin, which was extended to accommodate guests and more members of the vice-regal court. After spending a third summer in The Cottage the Prince began to make plans for the construction of the permanent house on the estate. A design was chosen from acclaimed architect Jonathan Gold and the new house was sited in a sheltered corner at the western end of Pebbly Beach. However, the intervention of an economic recession delayed plans for the duration. The Prince also ceased staying on the estate for the length of the recession, partly as a security measure against threats to his safety, and also as a austerity measure to save money for the cash-strapped government. In the meantime, the King's health began to decline, and Prince Philip was recalled in Ingerland in March 1917, six months short of the expected end of his tenure. 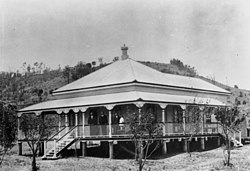 An improvement in economic conditions in November 1918 allowed access to the estate to resume, now under the eye of Sir Cuthbert Howell, the Prince's successor as Governor-General. Approval for the design and site of the new house was granted by the government and construction began in July 1919. Privately funded by Prince Philip himself, the new building cost an estimated £225,200 (GBP £10,000,000; NIP £754,147 16s 3d in 2014)[1].

The style of the new house was that of a Castellán Colonial Revival villa, and ever since the house has always been known simply as The Villa. Construction took fifteen months and was completed in late October 1920, just in time for the family to move in for Christmas of that year. Since it was completed, the villa has been occupied for every Christmas, except between 1941-1945 when fears of enemy submarine activity meant the vice-regal family spent their summers at Warmford Station instead. The Cottage was moved to a new location in the 1920s, and remains the second residence on the estate, where it is used as a guest house for visiting dignitaries. The Cottage was renamed to Cabbagetrees in 1967.

In 1970, approximately 1,163 3⁄5 acres (470.9 ha; 1.8181 sq mi) of land to the east of the estate was proclaimed as part of the Redmouth National Park, before being merged into the newly created Tāhuahua National Park in 1975. This effectively surrounded the estate by protected lands, and led to calls from more radical environmentalists that the estate should be acquired from the Crown to be placed into a national park for the benefit of all New Ingerish. However, successive government dismissed these calls as overt radicalism by those with an anti-royalist agenda. The government successfully argued that the estate had the de facto status as a protected area owing to it's restricted access and low usage by the Governor-General to just a few weeks a year.

However, this lack of use had it's own set of problems for the government. By the mid 1970s, the incumbent Governor-General Sir Cyril Ferguson, felt that the vice-regal budget could no longer justify the personal cost of managing the upkeep of the estate, and Sir Cyril decided that the estate should be sold. However, the new Prime Minister, Jacob Meyer instead offered to take on responsibility for the estate by transferring it to a newly established body, the Crown Estate that would be entirely self funding and run independently of government. Sir Cyril agreed, and in June 1978 Parliament passed the Royal Estate (Station Creek) Act[2], which formally transferred Station Creek to the Crown Estates Trust. At the same time, the conservation value of the estate was recognised, with the same protection restrictions as National Park placed on the estate. While many activities that would otherwise to banned (horse riding, limited hunting) allowed to continue, many activities would be banned and development of the estate would be kept to a minimum.

Today, the estate is still the summer haunt of the Governor-General and their family, with 20 governors-general enjoying the estate and the privacy it brings. It is from the study of the The Villa that the Governor-General delivers his annual address to the nation on Christmas Day. In January, he is joined by his Prime Minister, who spends a weekend with the Governor-General not only discussing matters of state, but the two will often join in the many recreational pursuits the estate can offer, such as bird watching, fishing, horse riding, hunting, swimming, and walking.

The entire Station Creek estate consists of slightly less than 6,867 acres (2,779 ha; 10.730 sq mi) acres along a narrow coastal strip between Redmouth and the Bare Point Rocks. Much of the estate is pristine or near pristine wilderness, consisting of coastal heath and swamps, southern beech (Nothofagus) forests, and sand dunes. The highest point on the estate is just 364 feet (111 m) above sea level.

Apart from the two houses, within the estate a number of smaller buildings, such as a private chapel, have been erected over the years. There are also a handful of cabins and huts standing throughout the estate, which act as shelters for picnics and other recreational activities.

Retrieved from "https://guelphia.mywikis.wiki/w/index.php?title=Station_Creek&oldid=8583"
Category:
Cookies help us deliver our services. By using our services, you agree to our use of cookies.