Boulton is a village and parish in the county of Vernonshire, situated 6 miles (9.7 km) west of Langford in the Woolcaster Rural District. As of 2010, the parish has a population of 535, 350 of whom live in the village.

It is thought that the both village and parish of Boulton are named after Edward Boulton (1812-1895), a nineteenth century grazier who owned the nearby Dyerhow Station.

Boulton is one of a number of "new villages" laid down by the government between 1872 and 1886 in order to encourage economic development and decentralise the population away from the burgeoning urban centres of New Ingerland. In this case, Boulton was established in 1877, and was indented to serve as a hub for wool and beef production. Despite these ambitions, the development of the village was hampered for many years by poor access to public services and a downturn in agricultural industries. In 1900, the village had a population of just 60.

It was only after the Second World War that the village began to enjoy any real growth. The closeness of the Boulton to Langford made it attractive to workers wishing to escape the city and move to a established settlement with a strong sense of community. By 1960, the village had grown to 150, and many of public services that had been lacking began to appear in the village, with the establishment of a general store and post office, a pub, and the re-opening of primary school. The government also constructed an oval for football and cricket, tennis courts, and a parkland reserve alongside the reservoir that could be used for a number of recreational purposes.

In 1990, an amendment to the Land Planning Act was passed by the Parliament. The act created a number of green belts around the major urban centres of the country, preventing undue subdivision of land and the construction of wholly new dwellings on previously undeveloped land (replacement structure remain allowable under the act). The act also allowed for the establishment of a series of Areas of Outstanding Natural Beauty (AONB), which recognised areas of significant landscape value, and placed severe planning controls on any land so designated. In the act and subsequent regulations, the entire parish of Boulton was placed under the protection of either or both of these new planning systems. As a result, the village of Boulton is now restricted in size to just over 200 blocks, each of which is approximately 1⁄4 acre (1,000 m2) in size. No new subdivisions can take place in the village or in any other part of the parish.

Despite these restrictions, the village has enjoyed a modest success rate in attracting people out of city and into the countryside. As of 2010, the village grown to a population of 535 people located in approximately 223 households. Both the post office and the pub have been expanded with the increase in patronage, and the school now enjoys a stable enrolment of pupils every year.

The village of Boulton sits almost atop the East Coast Escarpment on Brunswich Island, and falls within the Langford-Woolcaster Green Belt and is part of the Apsley Valley AONB.

The temperature and precipitation measured in the parish is entirely consistent with that of a maritime temperate climate. However, Boulton lies on the dry side of Brunswich Island, meaning the rainfall records are considerably lower than other parts of the archipelago. On the Köppen climate classification system, Boulton is ranked as a having a Cfb climate.

Land use and ownership

As it lies in a protected area, Boulton village is therefore currently limited in size to a maximum of 150 households, all of which are located on a thin sliver of land between the A1 road and the Boulton stream. The parish occupies an area of approximately 24,436 acres (9,889 ha; 38.181 sq mi) of land, giving it a population density of 28.02 inhabitants per square mile (10.82/km2). Under the provisions of the Lands (Church and Glebe Properties Vesting) Ordinance[1], 3,260 acres (1,320 ha; 5.09 sq mi) of the parish is owned by the vestry for the maintenance and upkeep of church properties within the parish, and where permissible, for other measures as well. This land is leased to tenant farmers and the revenues from it are used to pay for the upkeep of the rectory, and a number of other functions (both civil and ecclesiastical) exercised by the vestry. The land is held under an ancient feudal form of land tenure known as frankalmoigne[2].

According to the Statistics Agency, there: 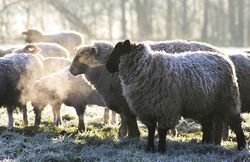 Most of the 330 or so working age inhabitants of the parish commute the 6 miles (9.7 km) in to work in nearby Langford each day, making Boulton something of dormitory suburb for the county centre. The historical economic base for the village has been the primary sector, with some 100 people still employed in these industries. The chief agricultural earners has always revolved around sheep, which supplies meat and wool, with Boulton Hall having been famous for at least a century in the breeding of the fine and superfine wool.

The smallest employer in the village is the tertiary sector of the economy, which services the village and nearby rural surrounds. Within the village itself there is a church (St Thomas'), a public house (the Ram's Head), a post office, a general store, a mechanic, a county police station, and a primary school. As of December 2014[update], these businesses and services employ some 25-30 people.

The Boulton Parish Council is an open vestry, with the present council having been formed in 1984. The parish itself dates back to 1877, when the area was first subdivided for close settlement. A vestry existed in Boulton after the construction of the church in 1899. However, after the formation of the municipalities in 1907, parishes temporarily lost the right to make by-laws for civil matters, with the vestry concerning itself solely with ecclesiastical matters.

Since the re-establishment of parochial government in 1984, parishes have been responsible for overseeing a diverse range of matters, including allotment gardens, care and maintenance of all Ingerian churches and their contents, management of all church tithes and income, civic heraldry, care of historic monuments, input on local planning applications, encouragement of local tourism, maintenance of rights of way for hikers and horse riders, control of litter, neighbourhood watch programmes, appointment of parish clergy, promotion in the parish the whole mission of the Church, public conveniences, recreation grounds and parks, street and footpath maintenance, traffic management, management of village halls, and the cleaning and drainage of village ponds and lakes.

Boulton is located in the county of Vernonshire in the far east of Brunswich Island, and therefore has elected members to the county council since 1886. Prior to this, the parish of Boulton was governed by the unelected Courts of General and Quarter Sessions. As of December 2014[update], the parish lies within the 1st electoral ward, and is represented by three county councillors. The counties are responsible for larger scale matters, such as biosecurity, civil defence, environmental management, garbage disposal, police, public transport, strategic planning, water supply, and welfare payments.

Since 1 October 1907, Boulton has been part of the Woolcaster Rural District, when municipal government expanded to encompass the entire country. Boulton is one of five parishes that form the municipality. Prior to 1907, the parish lay within the unincorporated area of the country, with municipal corporations limited by statute to those cities and towns with a population of at least 1,000 free settlers[3]. Municipalities today manage matters such as alcohol licensing, building ordinances, cemeteries, garbage collection, local planning, local streets and roads, pre-schools, libraries, public parks and gardens, and surf lifesaving.

In the national parliament, Boulton forms part of the Electoral district of Woolcaster, presently held by Prime Minister Matthew Jones of the Democratic Party. As the home of the incumbent MHA and as something of a dormitory suburb for nearby Langford, Boulton is very liberal in disposition and outlook[4], and has always lain within a constituency that typically returns either liberal or socialist members to the House of Assembly.

Landmarks in the parish include:

Retrieved from "https://guelphia.mywikis.wiki/w/index.php?title=Boulton,_Vernonshire&oldid=8765"
Categories:
Hidden categories:
Cookies help us deliver our services. By using our services, you agree to our use of cookies.