Judicial Committee of the Executive Council

The seat of the Committee is in the Judicial Committee Building in Kingsbury.

The genesis of the Judicial Committee of the Executive Council can be traced back to the Ingerland, where the Judicial Committee of the Privy Council has been in continual existence since 1833. In the case of the Ingerish Committee, all appeals and complaints which had previously been brought directly before the King-in-Council were now referred to the committee for its consideration.

In 1976, there were two separate events that took place which made this situation intolerable to the ongoing operation of the legal framework in New Ingerland. The first was the passage of the Criminal Code (Capital Offences) Act[2], which restored capital punishment as a legal form of punishment for the crimes of murder, rape, piracy, and treason in New Ingerland. In New Ingerland's system of common law, there existed a dormant provision for appeals to made directly to the Sovereign for clemency and pardon for any person convicted of a capital offence, thereby opening a means of appeal from the Court of Appeal directly to the Sovereign.

The second event was the case of Bagby v Charlton, which had been appealed unsuccessfully from the High Court to the Court of Appeal. The appellants in the case attempted to appeal directly to the Sovereign using the provisions of §82 of the Constitution of New Ingerland, which empowered the King-in-Council to appoint a tribunal of judges to hear certain cases pertaining to the constitutionality of laws, or to conduct a judicial review of any decision taken by the government or its various agencies. Up until this point, there had been no appeals from the general public to the sovereign using §82, with the provision used only once by the Parliament to test the constitutionality of a proposal to increase the term of the House of Assembly from three years to four.

In both cases, it was considered intolerable that the sovereign would be placed directly in the path of the administration of justice, and therefore it was considered important that a permanent mechanism be made available to the King-in-Council to refer any appeal made directly to him to a permanent committee of justices who could hear any cases that required a final avenue of appeal.

Having found the existence of a legal loophole, Parliament moved quickly to establish a permanent body to hear appeals made directly to the King-in-Council. On the 22 September 1976, Parliament passed the Judicial Committee Act, which established the Judicial Committee of the Executive Council, and empowered it to hear both appeals clemency and pardon, and questions arising under §82 of the Constitution of New Ingerland.

The Judicial Committee is charged with the sole responsibility for hearing appeals for clemency and pardon are made to the King-in-Council, who then refers the case to the Judicial Committee for advice on a particular appeal that has been made. The report of the Judicial Committee is always accepted by the King-in-Council as judgement in the same way that the Sovereign will follow the advice of his ministers in the Executive realm of government. Outside of this function, the Committee has no other power to hear appeals for other convictions upheld by the Court of Appeal, and indeed cannot hear an appeal unless a licence of leave has been issued by the Court to hear an appeal for clemency and pardon. Such licence will almost always be granted by the Court if the accused asks for it. This action is taken as a gesture of judicial accountability, and also to give the accused every possibility to protest his innocence if by chance the judicial process has by accident convicted him in error. 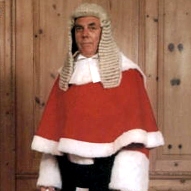 Lord Justice of the Judicial Committee of the Executive Council

In addition, judges from other Commonwealth nations may be invited to hear cases of special significance, when it is felt that the local judiciary is unable to fulfil this duty owing to a lack of expertise or because of a conflict of interest. However, this invitation only applies to judges from nations that employ the death penalty, such as Singapore. Such limitations were introduced because it was felt that only countries that employ the death penalty can appreciate all sides of the argument for it's use. In those nations that have abolished capital punishment, it was felt that the judiciary had been compromised by an irrational aversion to the death penalty, such that a judge is likely to move for commutation when no such clemency should be granted.

The Lords Justices sitting on the Committee will always wear the full ceremonial court dress of a High Court judge when hearing a case. The full ceremonial dress consists of a scarlet robe with fur facings and mantle, a lace jabot, and a full bottomed wig. In some circumstances, particularly when the court sits over summer, the jabot is eschewed in favour of bands and the full bottomed wig may be replaced with a bench wig, or variations thereof.

Main article: List of Lord Justices of the Judicial Committee of the Executive Council

Retrieved from "https://guelphia.mywikis.wiki/w/index.php?title=Judicial_Committee_of_the_Executive_Council&oldid=8705"
Category:
Hidden category:
Cookies help us deliver our services. By using our services, you agree to our use of cookies.