Policing in New Ingerland, along with judiciary and prisons system, is one of three major components of the criminal justice system of New Ingerland. The police system is conducted over two tiers, with the eight county police forces being responsible for providing first response to emergencies and other threats to public safety. These agencies are assisted by the national Royal New Ingerland Police, who assist the county police with particularly severe crimes, disasters that affect large numbers of people, or incidents that take place across multiple jurisdictions. 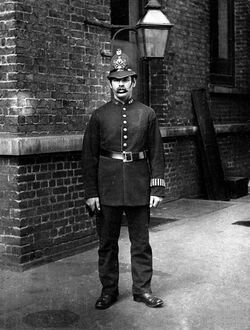 New Ingerland police in the 1880s

The first police force in New Ingerland, the Royal New Ingerland Police, was established upon the foundation of New Ingerland in February 1836. The first settlers brought 10 police constables with them to oversee law and order amongst the free population. Control of the convict population was carried out by a nascent militia force known as the New Ingerland Guard. The police remained under the control of the Ingerish Resident Commissioner until 1 January 1845, when they were transferred to local control under the authority of the Chief Secretary. From the outset, the Constabulary was concerned with only the most serious of criminal matters, such as murder, theft, rape, and assisting the Guard to apprehend escaping convicts. Most petty disputes between individuals and public nuisances were ignored by the police, which did not have the resources to deal with minor disputes.

With the expansion of settlement throughout the 1840s, the increase in criminal activity led to more police being appointed to the Royal New Ingerland Police. However, the general aloofness of the police force and its lack of interest in many matters led to calls for the formation of borough police forces in the towns. With the passage of the Municipal Boroughs Ordinance[1] allowing the formation of 'borough police', local police forces were established at Corfe Harbour, Earnestvale, Hillsborough, Langford, Lunenborough, Pasquale, Port Frederick, Regentsmere, and Williamsdene between 1845 and 1848. Additional borough police forces where subsequently established at Beaconsfield, Philipstown, Kingsbury, Shepton, and Swanbrook between 1848 and 1886. At the same time, minor offences were policed for the first time, with the ordinance outlining offences such as; drunk and disorderly conduct, indecent exposure, vandalism, and Sunday trading. Today many of these offences still form the basis of the Summary Offences Act[2].

Control over convicts was transferred to the Royal New Ingerland Police in 1856, with the New Ingerland Guard having been abolished and replaced by the New Ingerland Army. As a fully-fledged military force, the army was more concerned with the defence of New Ingerland from the perceived threat of a Russian invasion during the Crimean War, and so domestic policing became a fully civilian undertaking for the first time.

In 1886, with the passage of the Local Government Act[3], the local police forces were amalgamated in to eight police forces and placed under the control of the county councils, forming the modern county police forces that endure to the present day.

The day-to-day administration of the county police is placed in the hands of a commander, who is appointed by the by the county council on the advise of the high sheriff. The commander in turn appoints deputy and assistant commanders from within the county police force.

Other duties include providing physical protection at government establishments including Parliament House; royal palaces and residences; the residences of the Prime Minister; foreign Embassies and Consulates; the New Ingerland Nuclear Energy Commission reactor; and a number of other sensitive and covert locations across the country.

In addition, the RGP has a national remit in providing support county police forces in the investigation of crime and assist these police forces with their investigations with regard to serious crime. Internationally, the RGP acts as a single point of contact for international enquiries from overseas law enforcement agencies, and maintains a direct connection to Interpol databases.

There are presently eight county police forces, known as constabularies, in New Ingerland.

All police forces in New Ingerland use much the same rank structure and insignia for uniformed officers. The only slight variation lies in the rank names and insignia of the leadership team of the Royal New Ingerland Police vis-à-vis the county constabularies.

Retrieved from "https://guelphia.mywikis.wiki/w/index.php?title=Policing_in_New_Ingerland&oldid=8721"
Category:
Cookies help us deliver our services. By using our services, you agree to our use of cookies.