The State Opening of Parliament is a biennial event that takes place to mark the commencement of a session of Parliament. Attended by all the great officers of state, as well as the senators and members of Parliament, the event takes place in the Seante chamber. It is from here that the Monarch reads the Speech from the Throne, the speech that outlines the government's agenda for the coming session.

The "opening" is in fact separate openings: a commission opening on the Monday and the official state opening on the Tuesday. Those present on one or both days include the Sovereign and other members of the Royal Family, the Prime Minister, the Speaker of the House of Assembly, the Lord Chancellor, the Chief Justice of New Ingerland, various Ambassadors and High Commissioners, members of the Senate and the House of Assembly, the Chief of the Defence Force Staff, the Chief Herald and other heralds of the Office of Heraldry, and the Lord Chamberlain of the Household. The general public is also welcome to attend, and may view the proceedings from the galleries in either chamber, or from inside the Central Hall of Parliament House.

Oaths and election of the Speaker

All members of Parliament assemble the day before the State Opening in order to clear up a number of housekeeping tasks that must be completed before the Parliament can be opened. It has become common practice for the opening of the first session of a new Parliament following a general election to be conducted by commissioners appointed by the Sovereign. The commissioners are usually the Chief Justice and the two most senior puisne justices of the Judicial Committee of the Executive Council.

The commission opening is done chiefly to allow for the swearing in of new Senators and Members and the election of the Speakers of the House of Assembly, which must always take place following the opening of the first session after a general election. This process may be lengthy and may lead to unpredictable outcomes and therefore it is undesirable to conduct these proceedings on the same day the King is due to open Parliament. This practice is not normally required for the opening of the second session.

Reception of the Speaker

Although the House of Assembly has the right to elect a Speaker, by law that election only takes effect when the new Speaker is confirmed in office by the Sovereign. Until then the Speaker is known as the Speaker-Elect. In order to be confirmed, the Speaker must present himself to the King and seek his confirmation to be appointed to the office of Speaker. Once their chamber has adjourned, the Speaker-Elect will proceed to Kingsbury Palace for an audience with the Sovereign. He will then march, unrobed, in a procession led by the Serjeant-at-Arms and followed by the Clerk and the Deputy Clerk. In this procession, the Serjeant-at-Arms carries the Mace in the crook of his arm to demonstrate that the Speaker has not yet been confirmed in office.

The Speaker-Elect will present himself or herself to the Sovereign and ask for His Majesty's confirmation as Speaker, which the King will almost always agree to, although he maintains the reserve power to refuse a nomination. The Speaker will ask the Sovereign for confirmation of the privileges enjoyed by the House of Assembly. The privileges of the Assembly are the legal powers that members enjoy by virtue of their election. They aim to protect the good name of Parliament and to enable them to carry out their legislative duties without fear or favour. By convention, the Sovereign will reply to the Speaker's request for confirmation of these powers, as they are essential to a functioning Parliament. In addition, the Sovereign gives authority to the Speaker to administer the oath or affirmation to any members who have not yet taken it and may therefore need to take it in the future. 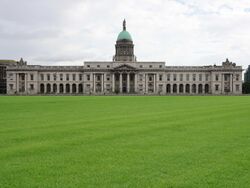 The State Opening of Parliament always occurs on a Tuesday, a week and two days after Easter.

The formal part of the day commences with the King proceeding from Kingsbury Palace to Kingsbury Cathedral in a horse-drawn coach. At the Cathedral, the King attends the a service seeking blessing and guidance along with the various great officers of state. At the same time, the Crown of New Ingerland is carried from Kingsbury Castle to Parliament House in its own State Coach. From the steps of Parliament, the Crown is passed by the Warden of the Castle to the Comptroller of the Lord Chamberlain's office. It is then carried to the Royal Gallery, where it is displayed along with the Sword of State, which is carried by the Gentleman Usher to the Sword of State and the Sword of Justice, which is likewise carried by the Gentleman Usher to the Sword of Justice.

From the Cathedral, the King then proceeds to Parliament House in a horse-drawn coach. The King uses one of the state coaches built for him by local craftsman over the years. The King is escorted by the Royal Household Guard and the City of Kingsbury Regiment for his protection and also as a display of his power as Commander-in-Chief of the New Ingerland Defence Force. As the King proceeds in his coach to the Parliament House, a member of Parliament (usually the Treasurer of the Crown Estate), is taken to the Palace as a ceremonial hostage to protect the King from hostile action whilst in the grounds of Parliament. The hostage is released upon the safe return of the King to the Palace.

Retrieved from "https://guelphia.mywikis.wiki/w/index.php?title=State_Opening_of_Parliament&oldid=8568"
Category:
Cookies help us deliver our services. By using our services, you agree to our use of cookies.